A mold is a fungus that grows in the form of multicellular filaments called hyphae. In contrast, fungi that can adopt a single celled growth habit are called yeasts.

Molds are a large and taxonomically diverse number of fungal species where the growth of hyphae results in discoloration and a fuzzy appearance, especially on food. The network of these tubular branching hyphae, called a mycelium, is considered a single organism. The hyphae are generally transparent, so the mycelium appears like very fine, fluffy white threads over the surface. Cross-walls (septa) may delimit connected compartments along the hyphae, each containing one or multiple, genetically identical nuclei. The dusty texture of many molds is caused by profuse production of asexual spores (conidia) formed by differentiation at the ends of hyphae. The mode of formation and shape of these spores is traditionally used to classify molds. Many of these spores are colored, making the fungus much more obvious to the human eye at this stage in its life-cycle.

Molds are considered to be microbes and do not form a specific taxonomic or phylogenetic grouping, but can be found in the divisions Zygomycota and Ascomycota. In the past, most molds were classified within the Deuteromycota.

Molds cause biodegradation of natural materials, which can be unwanted when it becomes food spoilage or damage to property. They also play important roles in biotechnology and food science in the production of various foods, beverages, antibiotics, pharmaceuticals and enzymes. Some diseases of animals and humans can be caused by certain molds: disease may result from allergic sensitivity to mold spores, from growth of pathogenic molds within the body, or from the effects of ingested or inhaled toxic compounds (mycotoxins) produced by molds.

What Can It Do To Me?

Molds are ubiquitous, and mold spores are a common component of household and workplace dust. However, when mold spores are present in large quantities, they can present a health hazard to humans, potentially causing allergic reactions and respiratory problems.

Some molds also produce mycotoxins that can pose serious health risks to humans and animals. Some studies claim that exposure to high levels of mycotoxins can lead to neurological problems and in some cases death. Prolonged exposure, e.g. daily home exposure, may be particularly harmful. Research on the health impacts of mold has not been conclusive. The term “toxic mold” refers to molds that produce mycotoxins, such as Stachybotrys chartarum, and not to all molds in general.

Molds can also pose a hazard to human and animal health when they are consumed following the growth of certain mold species in stored food. Some species produce toxic secondary metabolites, collectively termed mycotoxins including aflatoxins, ochratoxins, fumonisins, trichothecenes, citrinin, and patulin. These toxic properties may be used for the benefit of humans when the toxicity is directed against other organisms; for example, penicillin adversely affects the growth of Gram-positive bacteria (e.g. Clostridium species), certain spirochetes and certain fungi 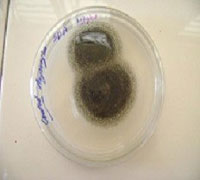 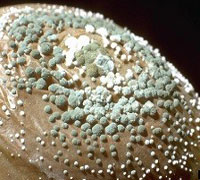